To Sell or Keep, that is the Question

For the last few months I have received nothing but bad news about my property on Cortes. It started in September with a rare November rental being cancelled. This proved to be just as well as at the end of September a rare summer storm resulted in a tree branch cutting my power and damaging the service into the house so Hydro would not reconnect it. Events then seemed to take on a life of their own. It was akin to a row of dominos falling – no power, new service, new electrical panel, take down the offending trees, limb and buck them, massive clear up, then of course the utility room needs wallboard and painting. As the drama comes to a close I am facing a bill of over $6,000 then a Hydro bill of $1,000 followed by the need to spend $1,600 on a water treatment plant. I wondered what the universe was trying to tell me. Was it a sign to sell my property? It seemed time to employ my trusty DecisionClarity model.

I began by looking at the rational, emotional and fears. From a rational perspective my winter experience seems like a very negative omen; the place is not paying for itself; I only use it four or five times a year; the roof is going to need doing; I have very few rental bookings this year. On the other hand it contributes to my friendship with my buddy Philip who manages it for me and I visit every time I go there; I have no need to sell it; I love the energy of Cortes when I am there. Underlying my confusion is the question on whether the universe is guiding me to sell. If yes then I need to let it go, perhaps its new owner is already waiting for it somewhere. I know that getting in touch with my inner wisdom will ensure that I make the right call. I sit for a moment then gaze out of the window onto a gloomy, grey Vancouver day – there on the hydro wire sitting in the rain is a crow. It seems a perfect symbol for patience in the face of adversity. I sense that I will see clearly if I delay any decision until my visit in a weeks time.

Sometimes it takes a trinity of serendipities to create a wonderful experience. My recent trip to Cortes Island started with my friend Angela from Toronto wishing to visit; this combined with my own desire to see my property after the ravages of winter then coincided with Vancouver’s first spell of glorious early summer weather. I thought I needed to make a decision on whether to sell or stay. Yet here I was sitting on my deck in the fading evening sun appreciating the exquisite peace of this pristine spot and feeling any angst fade with the setting sun. Showing off the wonders of Cortes Island helped to reactivate my own love of the area. In addition the energy and hard work of my dear friend Philip, and the diligence of my cleaner José resulting in Potlatch Haven looking so sweet and desirable that I fell in love all over again. All the problems dissipate; it is not about selling, it is about patience and trust. The details are for another day. (For more on my trip to Cortes see http://wp.me/pENvY-cr) 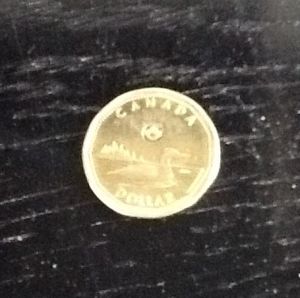 After one of my DecisionClarity presentations someone mailed me a card with a picture of a penny on the front and the words “Executive Decision-making Tool” It made me smile but reminded me that a coin can be as valid a way of tapping into our inner wisdom as any other external agent such as a rune, tarot card or the I Ching. It requires conscious intention, a query and the ability to suspend the belief that you have become crazy. Recently I put the coin toss to a true test. For months I have been lusting after an iPhone; I have been evaluating my decision by exploring the rational reasons, my feelings and my fears. It is clearly an unnecessary, emotional desire for a bright shiny object that will cost me a whole lot of extra money yet I still wanted one. Inconveniently my pathetic flip top phone from another era, that costs me less than a $100 a year, refuses to die so there is little from a rational point of view to support this decision. I set out on a walk around the beautiful Kitsilano seawall and decided it was time to put this to bed once and for all and the final arbiter would be a flip of a coin – heads I buy one and tails I don’t.

I had just been given a shiny new 2012 loonie in my change and it seemed the perfect choice. I flipped in high in the air, failed to catch it so it landed on the ground tails up. I decided that one did not count so I flipped it again. This time it was a thoroughly disappointing slow roll that when I caught it still showed the annoying image of the loon so I decided that it definitely didn’t feel right. Time for one more flip. This time the coin arced up dramatically in a tight spin, landed safely in my right hand and was deposited on the back of my left hand. This time it felt right, surely I could trust it this time. I gazed disbelievingly at the loon who gazed back accusingly as though saying, “so what’s your excuse this time?”

Although I understand the law of probability indicates that the chance of a head or tail is the same for every roll, I have never totally believed it. Surely the chances of a head on the third roll must increase? Then I laughed at my own temptation to manipulate destiny and surrendered my attachment to the iPhone. It was not to be. I felt a little chagrined, tinged with sadness but decided I would just have to make do. I already owned an iPad, a G5, an iPod touch and a PowerBook; perhaps this was a small way I could help to save the planet.

The following day I was checking up on other possible phone choices, they all looked so inadequate compare with an iPhone so I decided to make do until my flip top gives up the ghost. That evening I got an e-mail from my friend Angela who had just visited from Ontario and had purchased a brand new iPhone 4GS. I sat in amazement as I read her message,” SO…I have a question for you…I know you pulled a rune the other day about your iPhone want. Now I know it’s not a NEW iPhone 4, but if I get my I phone 3G switched up…would you like it? It’s a new older phone that has all the great app and internet/photo options of the new one…and you wouldn’t have to pay for it. I was thinking that I would gift it to someone and no better than someone who has the iPhone love…. 🙂

I get an iPhone for free! It’s as though my deeper wisdom through the loonie knew that this was going to happen. Of course I could not buy an iPhone, I was getting one for free. The Divine has a great sense of humour.