When the Past Meets the Future

“The dark thought, the malice, meet them at the door laughing and invite them in. Be grateful for whomever comes, because each has been sent as a guide from beyond.” Rumi

I love this poem. How often do we judge ourselves for a negative thought or a reaction? Have you ever said to your self “I must be a terrible person to think or react this way”? Rumi places such a different perspective on the negative experiences of our lives. In his poem The Guest House, beautifully translated by Coleman Barks in The Essential Rumi, he reminds us that we can learn from all such experiences. “A joy, a depression, a meanness, some momentary awareness comes as an unexpected visitor. Welcome and entertain them all.”

Recently I drove back from California listening to a CD set titled Lifelines written and narrated by Christina Baldwin, one of the pioneers in promoting journal writing. She suggested a way of approaching writing that she calls flow writing. It requires you to close your eyes, take a few breaths to centre yourself then open them and begin to write about the first object that your eyes encounter. Upon my return I decided to engage in this practice. As I opened my eyes they fell on a beautiful sculpture that sits on the mantle above my fire place so I began to write without thinking, just allowing the words to flow. 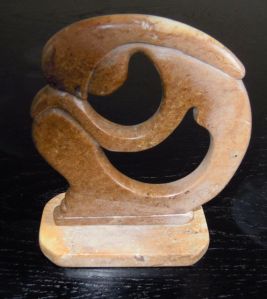 “The Meditator”, a gift from my friend Sue, I love its elegant form, I think it is made of soapstone, a delicate light brown in colour, its head is bowed in supplication and it is one of my favourite pieces. Yet a guilty secret emerges as my pen flows across the paper; I recall that when I opened this gift at Christmas a few years ago I did not immediately like it; I felt disappointed and for some reason there was a sense of let down that I have never really understood and have since blocked. From a rational perspective it did not make sense. It was a perfect gift, a lovely appreciation of who I have become. a recognition of the many positive changes I have made in my life. It was a gift chosen with care and thought. Yet in the moment of opening the gift I was unable to fully appreciate it. Now it sits in the centre of my mantle, head bowed in humble prayer, an exquisite piece of art that I love.

And then as I carried on writing, the realization dawned on me that this paradox was not a unique event. Frequently I have to work to be appreciative of a gift, particularly at Christmas, even when it is perfect. I wonder what underlying complex is at the heart of this paradox. Slowly I begin to see a picture of a young boy at Christmas. It was my favourite time of the year; despite my parents having very little money, somehow my mother would procure a gift that always exceeded the expectations of both my brother and I, and led to that joy and delight that became an indelible recollection of my childhood Christmas. I can still recall the gifts: an electric train set, a table football game, a table cricket game, they became a centre of focus not just for hours but for weeks.

Was it possible that the power of Christmas past, unconsciously programmed an expectation into the adult that of course could never be met? Did the opening of a gift at Christmas unwittingly create this need for the childish satisfaction and pleasure of those years long ago? In reflection I can recall at times thinking I would much rather have a game or a toy of some kind then realizing how absurd that was. Perhaps now I can recognize this old pattern, I can smile at it instead of judging it. I will move into genuine appreciation for the gift instead of getting trapped in my old pattern and then judging myself mercilessly for it. Next time “I will meet it at the door laughing and invite it in.”

“This being human is a guest house, Every morning a new arrival. A joy, a depression, a meanness, some momentary awareness comes as an unexpected visitor. Welcome and entertain them all. Even if they are a crowd of sorrows, who violently sweep your house empty of furniture. Still treat each guest honourably. He may be clearing you out for some new delight. The dark thought, the malice, meet them at the door laughing and invite them in. Be grateful for whomever comes, because each has been sent as a guide from beyond.”