The Beagle Knows The Way

Half a day lost staring out of this window
I wanted to know just one true thing about the Soul
But I left thinking for thought
and two inches of snow have fallen over the meadow.
Where did I go?
How long was I out looking for you my withness, my here?
Kate Knapp Johnson 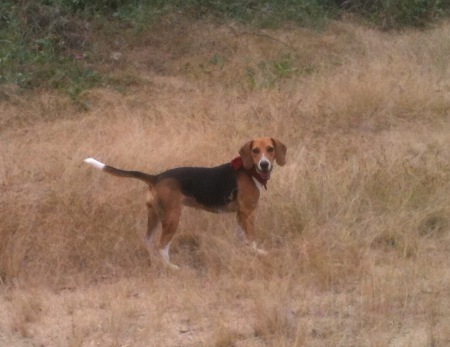 I recently arrived in Sayulita in Mexico. My custom every morning is to don the luxury of shorts and T-shirt and walk along the beach to a viewpoint on the headland at the North end. It is such a pleasure to shake off the claustrophobia of winter and stroll beside the crashing surf. On my first morning I observed a cute beagle wearing a red bandana playing with another dog. As I progressed the beagle passed me then stayed within relatively close range but always in front. I wondered if it was my imagination that it seemed to be glancing behind to ensure I was still there. When I branched off the beach to take a trail inland I was convinced it was following me from the front.
Interestingly enough this is an old espionage trick employed by agents who don’t wish to be discovered, they learn to follow someone yet stay in front. Perhaps the beagle had been James Bond in a former incarnation. I became fascinated in observing her. She was always taking a surreptitious glance to ensure I was there. At the brow of the hill she went ahead when I turned left to ascend a path to the viewpoint but within moments, she panted beside me and forged ahead. At the top, she frolicked happily until I was ready to leave then led me back down the path.
I decided to take an alternate route home and she seemed to anticipate my change of plan. At one point she paused on an alternative trail branching upward and turned back to look at me as though to say, “let’s go this way instead.” I had become quite attached to her friendly presence when she abruptly disappeared.
I was fascinated by this encounter and could not help but think there was some meaning attached to it but it was not until the next day while taking the same route on my own that a sweet metaphor emerged. I began to see the beagle as s symbol for the Soul while I was the Ego. The Ego self always thinks it knows the way while the Soul attempts to guide us on unexplored pathways. Of course the Ego self always thinks it knows better. Yet despite our stubborn persistence to go our own way, as the lovely poem by Kate Knapp Johnson suggests, the Soul will never abandon us.
Last night I had the perfect opportunity to observe this in action. I set out for the town to witness the end of the celebration of the Virgin of Guadeloupe. It concludes in the cathedral and I thought I would enjoy the chanting, music and ritual associated with such an occasion. As I passed my favourite taco place to my surprise there was a seat available at the bar. I ignored the voice that encouraged me to keep going; I set aside my concern that it was too congested jammed between two sizeable males and decided it was too good an opportunity to miss so I squeezed in. The Ego had its way.
The result was in hindsight to be expected. First I seemed to be invisible then the chef got my order wrong, nobody asked what I wanted to drink and the meal came without accessories. Then the man beside began to tell me that he was a chef and went on and on about his training that seemed to result in him working in a brew pub. Eventually he asked me a question, then proceeded to spend forty-five minutes answering it. It was not my favourite evening but at least the food I got, although a surprise, tasted good. The Soul is very forgiving.
During this year I have learned more than once that if I am open to change, leave space and pay attention then the guidance will be there. I just have to learn to follow rather than lead. “I think tomorrow I will follow the trail, the beagle suggested and see how it turns out!”

Postscript: I followed the beagle’s trail. It was not quite the idyllic jaunt I had expected. It was steep, haphazard with too many moments when I had to choose between options. I began to worry about getting lost in the jungle but for some reason the thought of the beagle leading the way encouraged me. Then just when I felt completely lost, like magic the signposts appeared – a rock emblazoned with blue paint, a wider path and finally a rock with the words in English “Base Camp” and an arrow pointing the way. It was a.great adventure and a great reminder that the Soul journey is not always the easy route to take.

– Posted using BlogPress from my iPad

This entry was posted on Saturday, December 13th, 2014 at 2:25 pm and is filed under poetry, resistance, soul, spirituality, Uncategorized. You can follow any responses to this entry through the RSS 2.0 feed. You can leave a response, or trackback from your own site.